Some Tips for When You Arrive

I want to start with an experience I had with Chuck Colson. Some of you may remember that he was involved in the Nixon era Watergate scandal and was called the White House hatchet man. Through his prison term after Watergate he became involved in helping those in prison move forward in their lives through a group called Prison Fellowship.

I was scheduled to do a film interview with him on the mall in Washington DC. Our crew had arrived early enough, but unexpectedly we had a technical problem with our van and were delayed getting on the mall somewhat and arrived moments before Mr. Colson came. This was the first time I had met Mr. Colson in person. He had an air of authority about him and carried himself like the Marine that he was. We had promised him earlier that we needed 15 minutes with him to achieve the shots in that location.

After the shoot at the mall we were to return to his office for an interview. We worked diligently to get the shots and we accomplished it in 15 minutes. When we called “wrap” at that location, he turned to me and said, “you’re a man of your word.” “Thank you,” I said somewhat surprised at this comment, “In what way?” He replied, “You said this would take 15 minutes and that’s what it took. I want you to know that now you can have all the time you need for the interview.”

I’ve never forgotten his comment. Those that know me are well aware that I am often times late or run over time, but on this critical occasion I was not. He was the customer at that moment and timeliness was very important to him. He had been in front of many cameras and done extensive interviews, but knowing that it wouldn’t go on and on was important to him. And when we satisfied that request, he opened up the door for a very personal and moving interview.

So my first principle is what we all know we’re supposed to do—be customer focused. Prior to showing up in person, consider whom you’re going to meet and what is important to them.

Then, give some thought to your Context before you take action.

Another life lesson for me. When I was an undergrad I had a theater prof, M. James Young (Jimma) who was a fabulous guy and became a lifelong mentor. One of the things he worked at teaching us was, as an actor, to think about others who were with you on stage and what was the context in which you were present as a character.

In those days I was a fairly energetic person (maybe that’s still partially true). I would often bound into a room, oblivious to what else was going on and try to create some energy and excitement. One day, Jimma was working with a couple of actors, talking with them about what was going on in a very emotionally demanding scene. I came bounding in with all of my noise, and he turned to me and said, “Can’t you tell something’s going on here. You can’t just come into a room without first seeing who is there and what’s going on. Step out and come back more aware of your surroundings and tune in first to what is happening there already.”

Ouch. But ever since then I try and come into a space and first see what the context is and then either quietly enter, or having entered, engage and modulate the room to a next thing. Determine the context.

Then, ask questions. To have the greatest impact don’t feel compelled that it’s all about you and the message you have to deliver. Learn about the people you’re meeting and their concerns by asking relevant questions. This will help you to…

Have an overarching goal to build relationships. Your job is not to make a big splash or hand out your business card to as many people as are in the room. Ultimately, the task of marketing is the task of making a meaningful connection with another person who, based on their need, may come to use the services or products of a company that fits them. It takes time to find out whether there is a fit and it takes time to build trust which ultimately is what makes for a loyal customer.

So, since you can’t rush these natural processes, relax and do the steady work that is more analogous to the approach of a farmer then of an efficiency robot. The farmer knows that preparing the soil is critical to the outcome of the eventual crop. Without good soil, rich with nutrient and all the natural activity of microorganisms and diligent little worms, it won’t be a good environment for a plentiful harvest. Prepare yourself and your soil by staying up on some of the issues of the day, keeping current on what’s happening in your industry and developing your specific expertise so that when asked you can give answers about things you know about and are learning. As you do, you’ll find people who will click and who eventually may become customers of fit.

This way, you can bring your best self. Before you enter the room do a mental check. Are you carrying baggage from the concerns of the day? From things at home? Preoccupation with other client challenges? Take a moment to take a good cleansing breath and leave all that at the door. If you find yourself nervous, join the club. As motivational sales training leader, Zig Ziglar reminds us, “you can’t keep the butterflies from flying around you, but you can get them all flying in the same direction.“ By reminding yourself that this is not all about you, or your company, but ultimately it is about making connections that can develop into meaningful relationships, you can get whatever nervousness you have directed towards this valuable goal.

Finally, just show up. So often we don’t have an impact because we never arrive. Schedule networking opportunities (great tips on this from Greg Peters, The Reluctant Networker), live presentations, and one-on-one meetings, then arrive. If you do you’ll benefit from real results and even—have fun. #MoveAhead 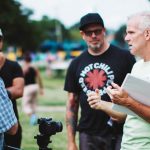 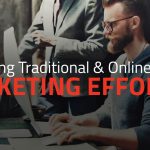